If you’re in Glasgow this April you may find yourself considering the sentiment behind Alasdair Gray’s novel Lanark: if a city hasn’t been used by an artist, not even the inhabitants live there imaginatively. That is certainly notthe case here. Over 18 days in April, vacant buildings, alleys and even skating rinks will become temporary spaces for contemporary art as more than 200 local and international artists show their work across 57 sites, providing plenty of evidence that Glasgow’s inhabitants are indeed a vividly imaginative bunch.

The artists are part of the biennial Glasgow International (GI), which has been quietly building momentumin recent years. Visitor numbers topped 201,000 in 2014, and this year’s programme is already looking bigger and bolder. It is focused on the rejuvenation of the kind of vacant post-industrial spaces that are increasingly evident in many cities. Usually when the global spotlight shines down on a large cultural event, the reaction from officialdom is to try to show the city’s best side – its great museums, thriving shopping districts, impressive architecture – and divert attention away from the gap sites and abandoned buildings that signify the loss of once-thriving industries. But Glasgow’s success as a culturally astute city comes inpart from its dualities and contradictions, and thoseempty spaces instead provoke the imagination to view defunct industrial spaces as sites for experimentation for an increasingly diverse artistic milieu.

An integral feature of every GI festival has been Open Glasgow, which shows work by emerging Glasgow-based artists conceived specifically for the city. These artists generate many of GI’s exhibitions, performances and events, as well as much of the joyful, anarchic energy that fills the city for two weeks.

Dan Miller is one such Open Glasgow artist taking the post-industrial theme as a jumping-off point forboth the site and the themes of his exhibition. The walls of his city-centre studio are lined with recent paintings, prints and drawings. Huge blank canvases primed and ready for action rest against another wall, while a nest of computer cables and a laptop suggest another, less analogue medium. Miller is both an artist and a curator for GI, pulling together five other artists to exhibit work in several of the abandoned railway arches in Cleland Lane adjacent to the Citizens Theatre.

Oersted, the title of the exhibition, is named after the Danish chemist who first produced aluminium in 1825 and is directly linked to the industrial legacy of these arches. Steff Norwood, one of the artists taking part, remembers an illegal aluminium smelt operating there in the 1970s. Revisiting this site has allowed Norwood to respond both materially and subjectively where such sensitivities to site may elude others.

Felix Welch, meanwhile, recognises that his exhibitionsite, SWG3, has allowed him the opportunity to create work on a much larger scale than usual. The sculptor, a recent graduate who is contributing to GI for the first time, has been galvanised by the possibilities. “I wouldn’t say that our show is site-specific, but our ideas have been influenced by the size of the warehouse-type space, both in the sense of creatingwork that fills the space, and in a juxtaposition with the run-down interior architecture,” he explains. It’s not always easy to get your hands on a space.

One artist, Steven Grainger, was continually thwarted as he searched for somewhere to host his group show: “Despite approaching almost every Council department I could find, even empty property owned by thecity was out of bounds.” Typically, a suitable space eventually came not from the official hosts of the festival but from Glasgow’s famously close-knit community of artists.

“Sculpture and Design, the fabrication company that produces artworks and architectural installations, and the artist Martin Boyce who has a spillover studio in the firm’s premises, very generously offered to host our show. Exhibiting in what is usually a workshop situation is a perfect fit, as all the artists in the show are real hands-on makers, either with paint or sculptural materials. It’s amazing to have the support of a network of artists – which is why so many of us are still here in this city.”

Other emerging GI artists are specifically seeking out spaces that align to their broader practice. Marion Ferguson has chosen to show her recent atmospheric prints in a tenement flat. “Showing in a domestic setting has been crucial to the development of the work,” she says.

Another artist whose exhibition site is influencing her thinking is Tessa Lynch, who has a solo exhibition at the Gallery of Modern Art: “As an artist who is influenced a lot by site, this has really fed into my sculptural processes and ideas,” she says. “My exhibition is looking into ideas around the commute and the emotional impact of the city day to day, so I have thought a lot about GoMA as a place of work and have become really interested in the way large public buildings are maintained – for example, how the steps of GoMA are pressure-washed, mimicking the natural process of rain, but equally eroding the surface of the building.”

What is behind Glasgow’s enviable – and internationally acclaimed – reputation for visual art is a question that has preoccupied many curators, artists and academics recently.The city’s size, its distance from the art market, the relatively low cost of renting a studio, the high quality of art education, even the weather have been suggested as factors. Where opinion is unanimous, though, is that Glasgow’s art scene has over time created its own distinct culture of generosity. Artists here are a friendly bunch. They exchange ideas, they lend each other equipment, they start bands, they knock on each other’s studio doors with a coffee, they endure failures together, they put on exhibitions with no budget and invigilate it together with no heating.

The glue in all of this is, of course, conversation. So for these two weeks in April, allow yourself to be immersed in a city as imagined by its artists, open your eyes to its unseen spaces and, above all, spark up a conversation with an artist–who knows where it will take you.

Head to the Press category on the Portfolio page to read similar articles. 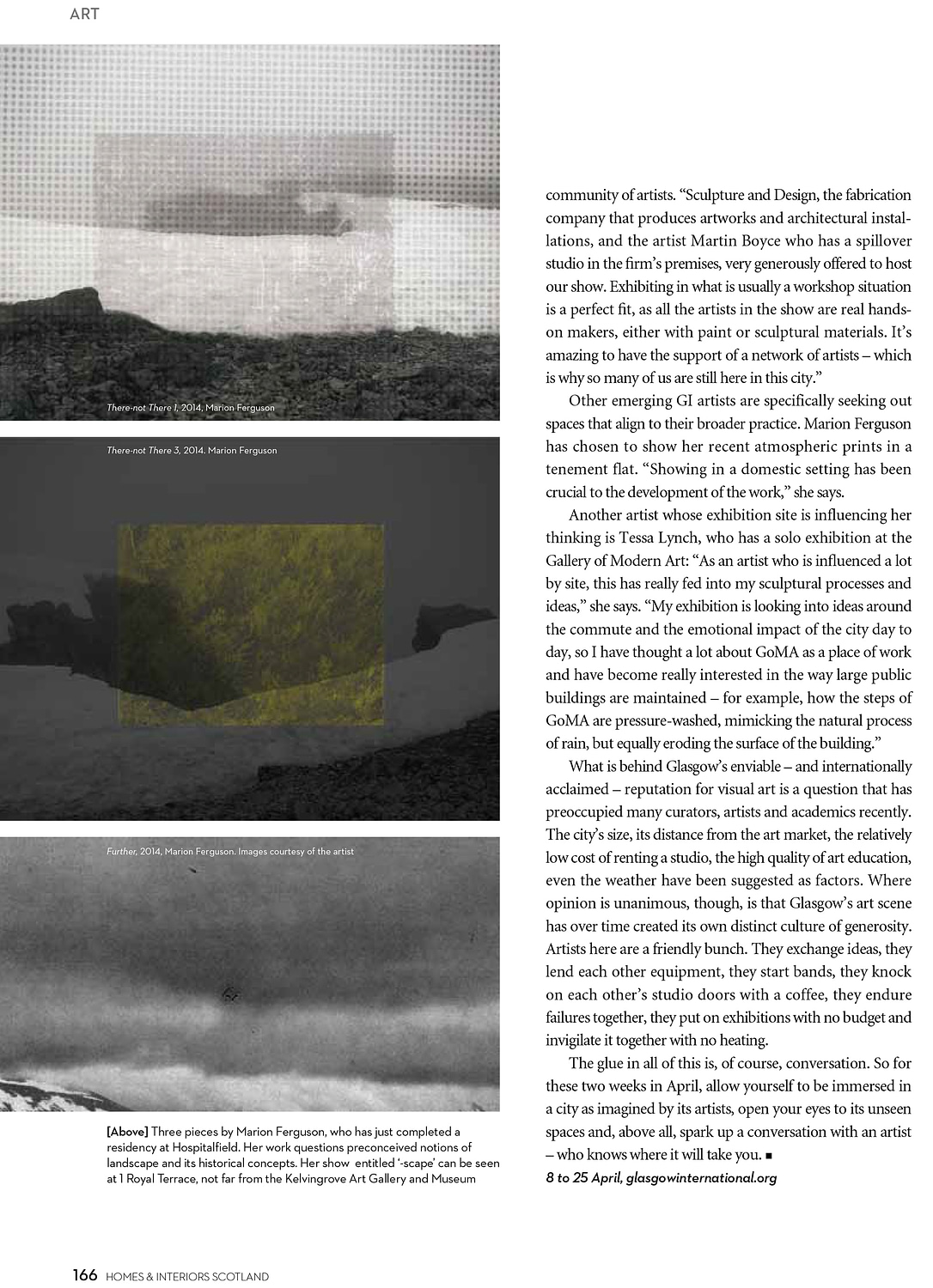